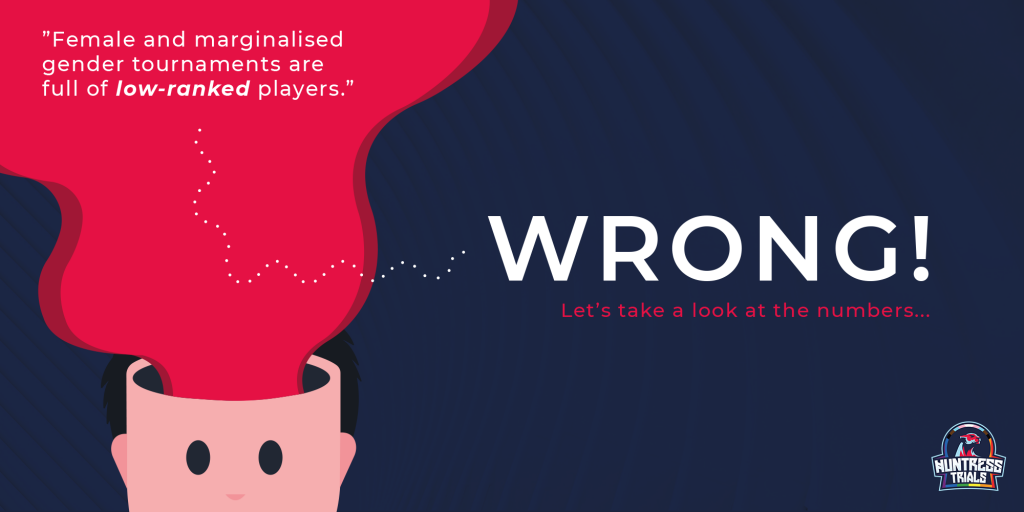 Rix.GG , a top UK esports organisation, shares 44% of players in the Huntress Trials April tournament were Immortal during April of the current act.

The data collected has had all private information removed and is taken from all 83 players signed-up to participate which includes team substitutes. Rix.GG hopes that sharing this data can help to dispel myths and misconceptions about the skill level and ranks of female and marginalised gender VALORANT players in the EU.

Here are some key stats:

But, you might be wondering, how does the Huntress Trials data to rank distribution compare to all player data?

The percentage of players by tier from data collected by Esportstales shows that only 0.1% of all players are Radiant, and 1.1% are Immortal. This means the top 38 (1 Radiant and 37 Immortal) players from the Huntress tournament are in the top 1.2% of all players (Immortal plus Radiant). When combining the ranks from Diamond to Radiant, this accounts for about 84% of the Huntress Trials tournament player base, which is in the top 5% of all VALORANT players.

Nicole “Wolf” Sølvmose, Head of Esports Inclusion, said: “It is no longer a secret that nearly 50% of all people in the world who game are females and marginalised genders, but where a lot of misconception and stereotypical thinking lies, is whether females and marginalised genders are capable at being good at the game they play. But, are they so good that they can take upon professional Esport athlete careers? The answer is simple, yes they are, and yes, they can.

Gender identity is not a blockade for skills in video games, just looking at our statistics gathered above, it is clear that this barrier of misconception and stereotypical thoughts between genders in Esports, no longer is and never has been applicable to gaming.”

Jorden “Raen” Dakin-White, Head of PR and Content, said: “Remove gender and the bottom line from these findings is, the vast majority of players in our Huntress Trials tournaments are in the top 5% of all VALORANT players. This is significant and these players are exceptional esports athletes.

For every player we have in our tournaments, there’s always more out there as shown by the growth of our player base over just three events. We hope that by hosting more events new players enter the scene, more players can have a full-time career within esports, and fully integrated teams become the norm.”

If you’d like to see the latest Huntress Trials tournaments you can watch live on Twitch or rewatch on YouTube.