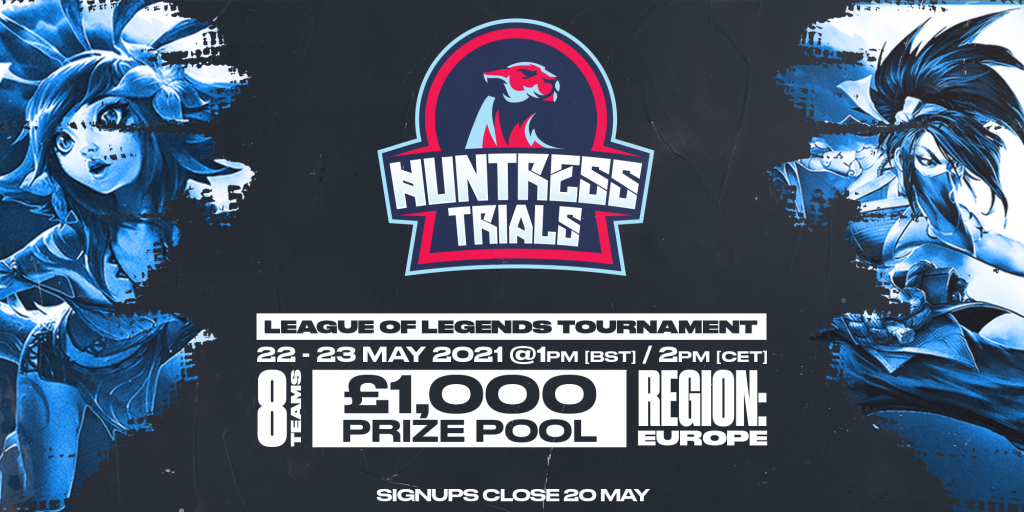 Rix.GG, a top UK esports organisation, announces it will host and sponsor a grassroots tournament for women and marginalised genders called the “Rix.GG – Huntress Trials – May – League of Legends – EU Open”.

The competition will feature up to 16 teams in total from across the EU, in a 5v5, single-elimination bracket, best of 3 (Bo3). Winners from the bracket will advance to the Grand Final which will be a best of 3 (Bo3) with the chance to take home the first prize.

The Huntress Trials April League of Legends EU Open prize pool is a sliding scale depending on the number of qualifying teams that enter:

The prize distribution will be:

The casters for this event will be Melody “Shoop’d” Tranter and Andy “j0kerr” Sturm and production for this event is Josh “Fill_30” Fillingham with Atreyu “Atrxyuu” Williams returning as the main observer and a to be confirmed replay observer.

Overseeing the tournament will be Tournament and Events Manager, Umar ‘Maru’ Aswat. Admins for the event will be Nicole “Wolf” Sølvmose, Jorden “Raen” Dakin-White, and if all 16 teams are reached Anna Moller.

Teams interested in participating can sign up using our form. Only the first 16 eligible teams will be allowed to participate.

Teams will be completing champion selection on ProDraft. A link will be supplied by the tournament admins to each captain and will be on hand to assist with the process.

Prize Pool: Dependant on the number of teams