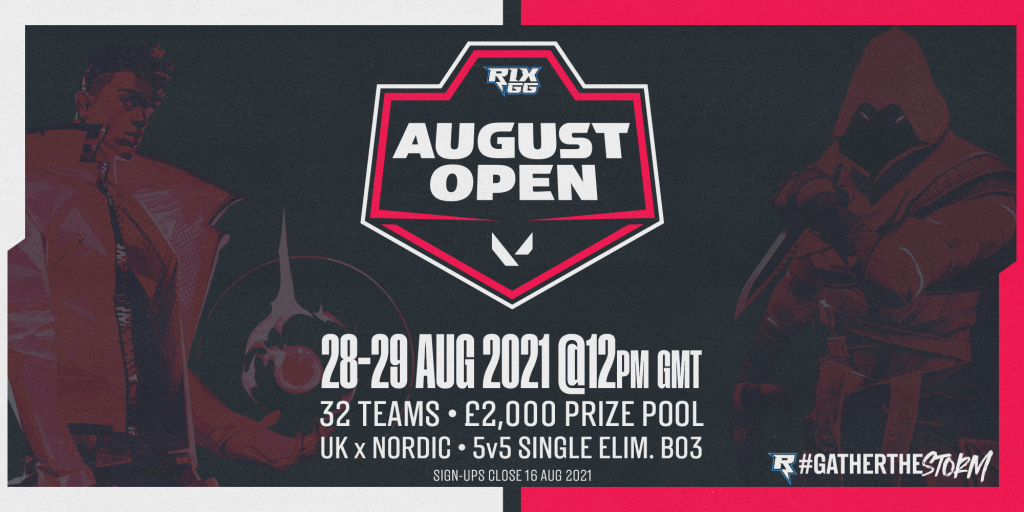 Rix.GG, a top UK esports organisation, announces it will host and sponsor its Rix.GG VALORANT NE Open tournament in August.

Teams are encouraged to join the Rix.GG Community Discord to communicate with the admins. At minimum the captain must be in the Discord to help arrange and troubleshoot matches.

The competition will feature up to 32 teams in total from across the UK and the Nordic region, in a 5v5, single-elimination bracket, best of 3 (Bo3). Winners from the bracket will advance to the Grand Final which will be a best of 3 (Bo3) with a chance to take home the first prize.

The casters for this event will be Neo “Ne0kai” Caine and the second caster to be confirmed. Ne0kai has previously worked with Rix.GG on previous editions of the Rix.GG VALORANT Open.

Teams interested in participating can sign up via our form by Wednesday, 25th August at 21:00 BST/22:00 CEST. Only the first 32 eligible teams will be allowed to participate.

Country restrictions are in line with regional guidelines set by VALORANT and Riot Games tournament licenses. For the purpose of this tournament, teams must have the majority of their players be from the UK, Iceland, Norway, Denmark, Sweden, Finland, Greenland or the Faroe Islands.

Format: 5v5; Single-Elimination Best of 3 Bracket; Grand Final is a Best of 3

Eligible countries: Majority of the teams’ players must be from the UK, Denmark, Finland, Iceland, Norway, Sweden, Greenland and Faroe Islands.