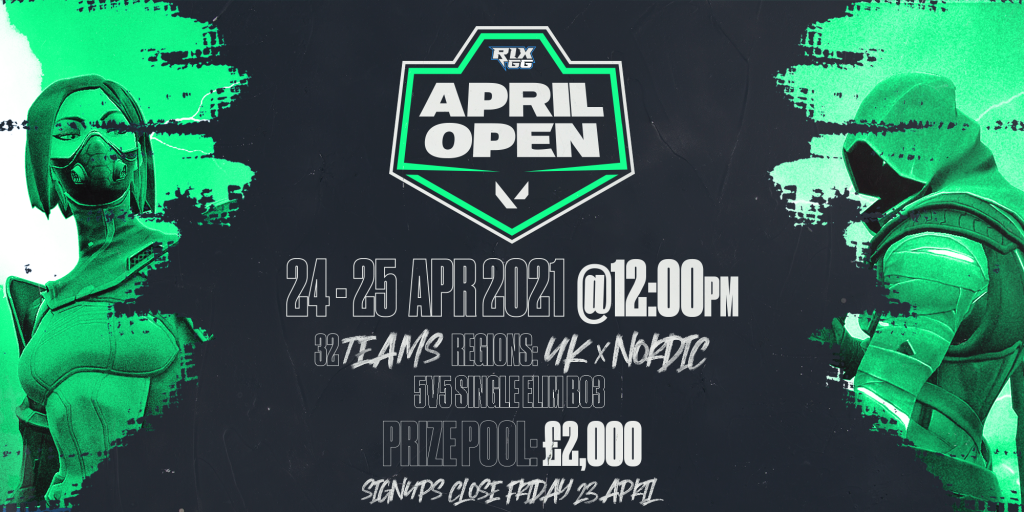 The competition will feature up to 32 teams in total from across the UK and select countries in the EU, in a 5v5, single-elimination bracket best of 3 (Bo3). Winners from the bracket will advance to the Grand Final which will be a best of 3 (Bo3) with a chance to take home the first prize.

The casters for this event will be Ryan “ReTr00” Bernard and Neo “Ne0kai” Caine. ReTr00 and Ne0kai have previously worked with Rix.GG on RixGG Kick-Off Community Tournament.

Overseeing the tournament will be Tournament and Events Manager, Umar ‘Maru’ Aswat. The production team will consist of Producer Jake “JakeyBoy” Murton and Observer Jason ‘Salty_Jayy’ Batzofin with the support of tournament admin Anna Møller.

Country restrictions are in line with regional guidelines set by VALORANT and Riot Games tournament licenses. For the purpose of this tournament, teams must have the majority of their players be from the UK, Iceland, Norway, Denmark, Sweden, or Finland.

Format: Single-Elimination Best of 3 Bracket; Grand Final is a Best of 3