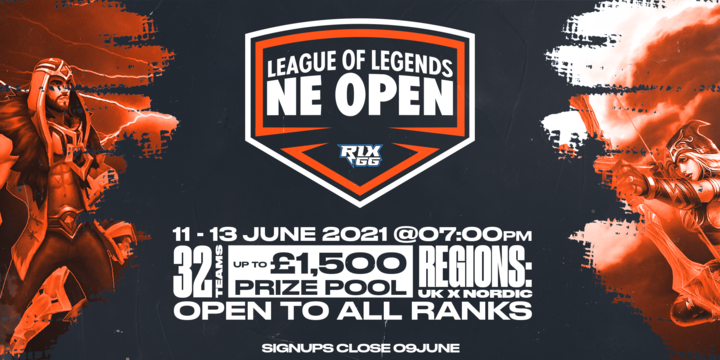 Rix.GG, a top UK esports organisation, announces it will host and sponsor a tournament open to everyone called, “Rix.GG League of Legends NE June Open”.

The tournament will take place across three days starting on Friday 11th June and concluding on Sunday 13th of June.

Teams are encouraged to join the Rix.GG Community Discord to communicate with the admins. At minimum the team captain must be in the Discord to help arrange and troubleshoot matches.

The competition will feature up to 32 teams in total from across the UK, Ireland and the Nordic region, in a 5v5, single-elimination bracket, best of 3 (Bo3). Winners from the bracket will advance to the Grand Final which will be a best of 3 (Bo3) with a chance to take home the first prize.

The League of Legends – June Open will feature a sliding scale prize pool depending on the number of eligible teams that enter:

The production for this event will be confirmed in the coming days.

Overseeing the tournament will be Tournament and Events Manager, Umar ‘Maru’ Aswat. Admins for the event will be Nicole “Wolf” Sølvmose, and Jorden “Raen” Dakin-White.

Eligible Countries: UK and Nordics; though some country restrictions may apply.

This tournament is not endorsed or supported by Riot Games.
We’ll see you there, good luck to all the teams entering the tournament!
#EsportsisforEveryone